I was recently invited by Concurrences (thank you!) at the French Parliament to assess the need to retool antitrust law for digital issues. We had a very nice exchange among the panel that I would like to thank for opening up many new avenues of research. I also very much enjoyed the format – a real discussion rather than a few monologues, and I thought of sharing a few thoughts with you. Those are the topics that, if I were given only 10/15 minutes, I’d choose to address (meaning that it is highly incomplete).

It all starts here. Without refocusing antitrust & competition law toward their main goal, I believe that discussing the rest is actually… pointless. In short, we have to make a choice between relying on evidence OR using soft concepts (as the Commission has done in the Google cases, and NO, I never received ANY money to say that). Generally speaking, when the Commission is not relying on the categories of practices that we know already (tying, predatory pricing…) but rather is sanctioning a “new type” of practice, it is forcing that practice into the realm of the rule of law. For that reason, the EC must specify the legal test being applied, in clear terms. And at the end of the day, it is important to recognize that antitrust & competition law are economic tools and have nothing to do with morality; as I recently argued in this paper (here). 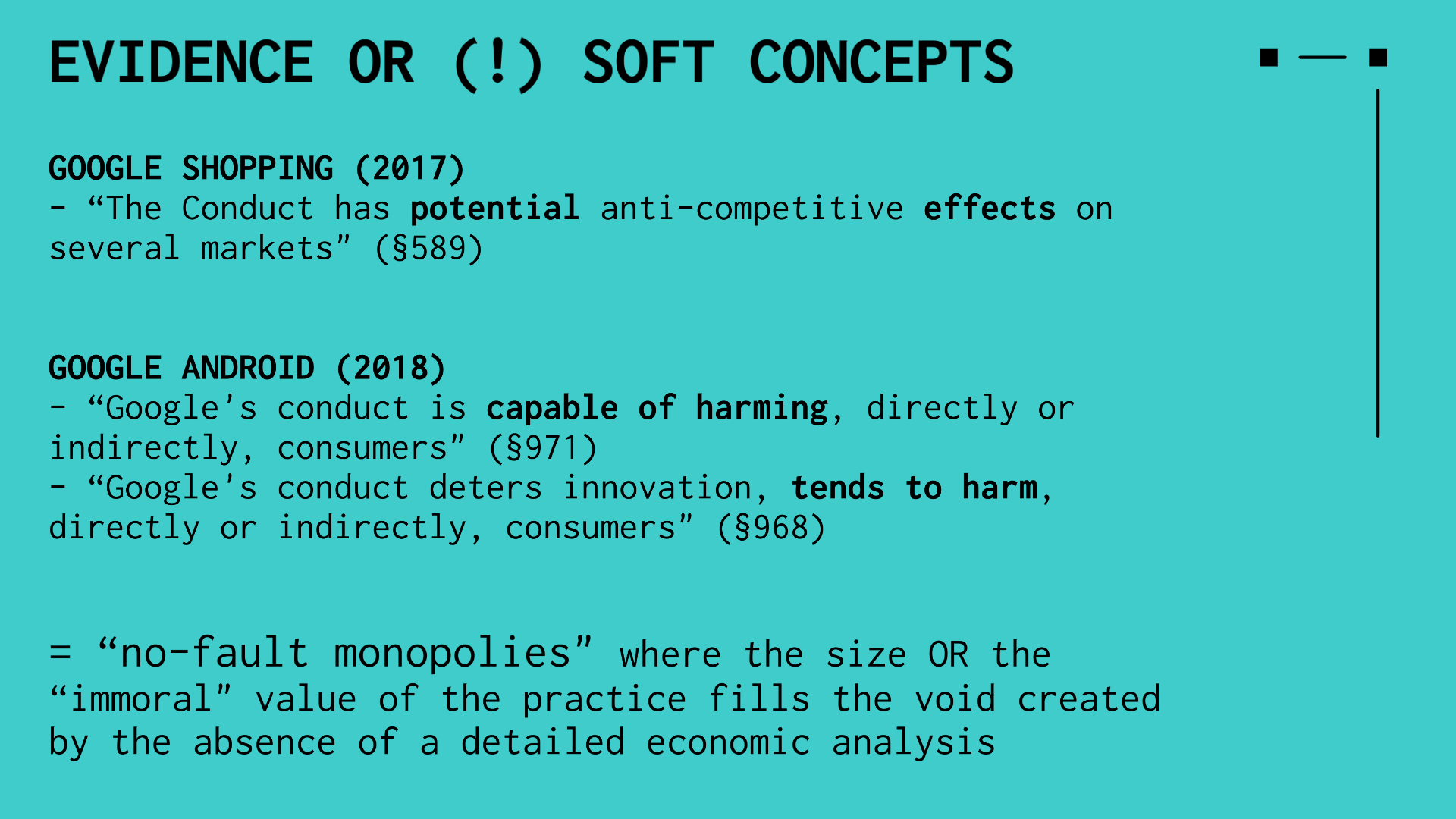 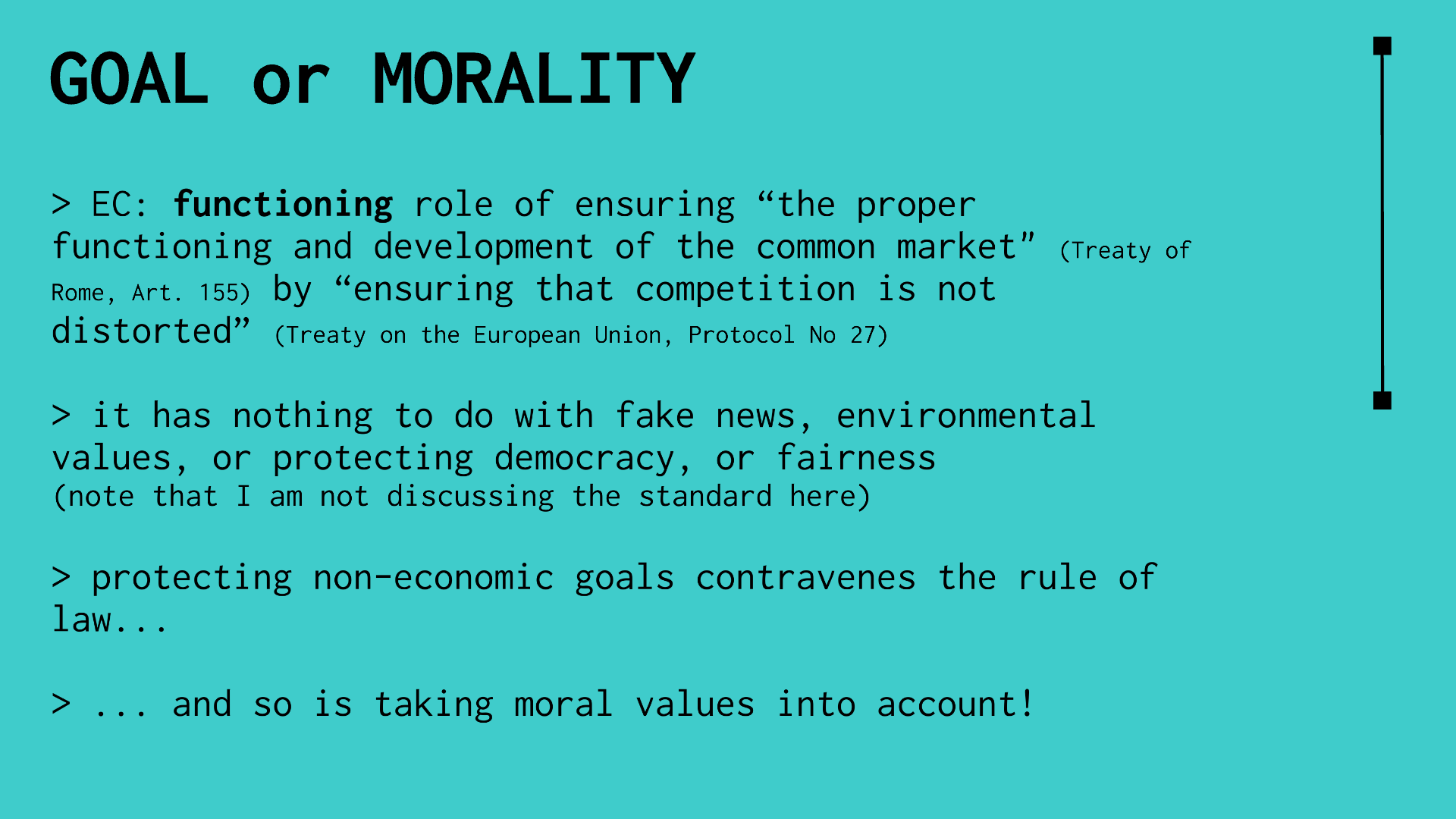 Several concepts that we have been using for decades are poorly transposable to digital issues. The Commission is sometimes playing on the ambiguity it creates, as we see for instance with the concept of “essential facilities” when the EC is flirting with the idea of imposing access to important sets of data while never qualifying the services of tech giants as essential facilities. You can’t have it both ways; clarification is needed. The same goes for privacy issues, let’s start with empirical studies quantifying the harm done to the consumer when reducing privacy before engaging in more litigation (especially when they’re outside of competition law). 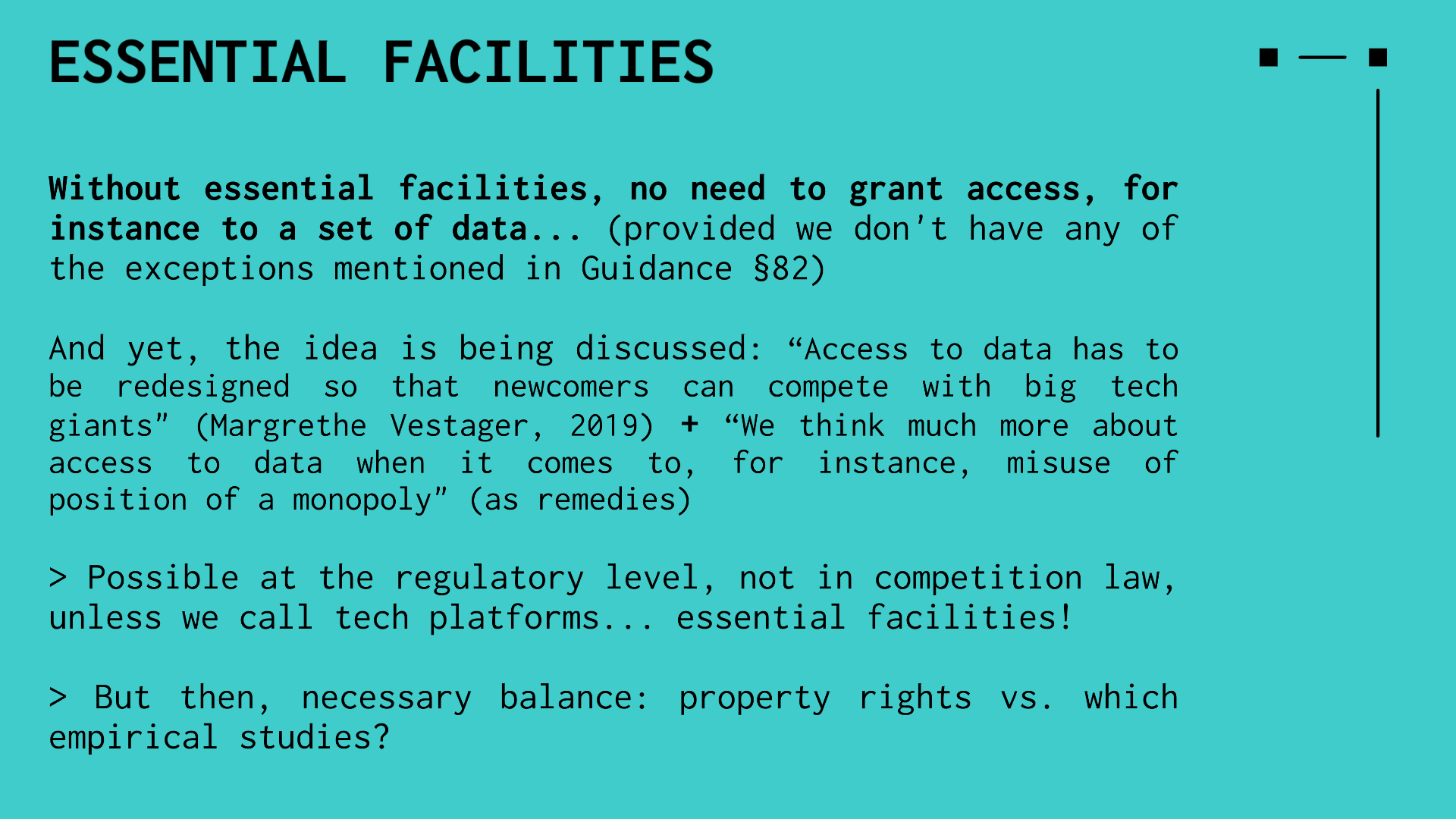 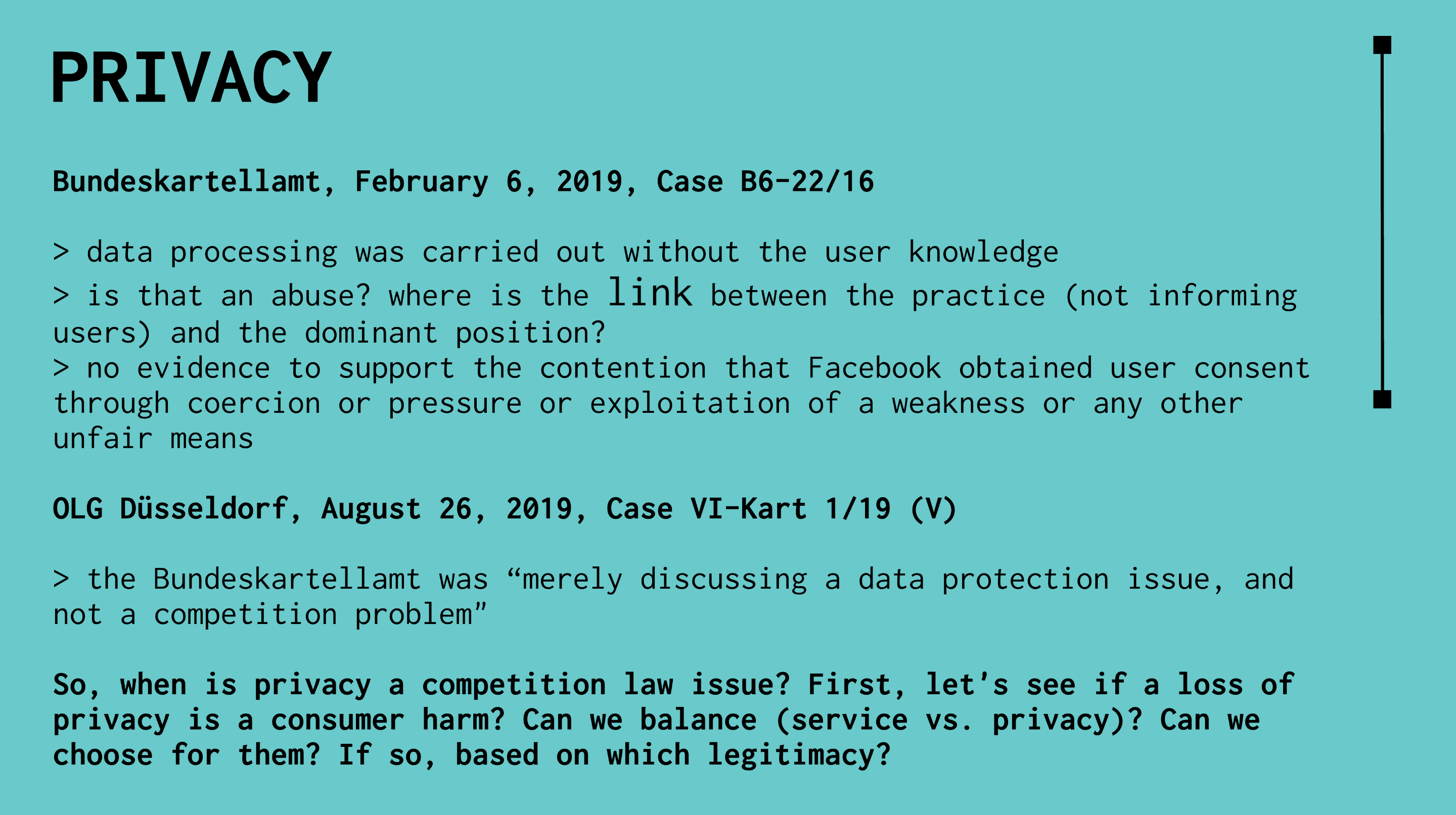 Although I believe that we have most of the necessary tools to address digital practices, I note the absence of decisions dealing with the coding and programming of platforms and software. It creates a major legal loophole. Granted, Article 102 is broad enough to encompass any practice, but I believe we need to clarify the legal assessment applied to these practices to increase legal certainty and limit legal errors. Let’s start by recognizing predatory innovation as a stand-alone anti-competitive practice (as I have argued here) and let’s then agree on the legal test to be applied (as I have argued here). Generally speaking, antitrust and competition authorities should engage in a dialogue with computer scientists and programmers, as they have done in the past with economists. It means: HIRING. 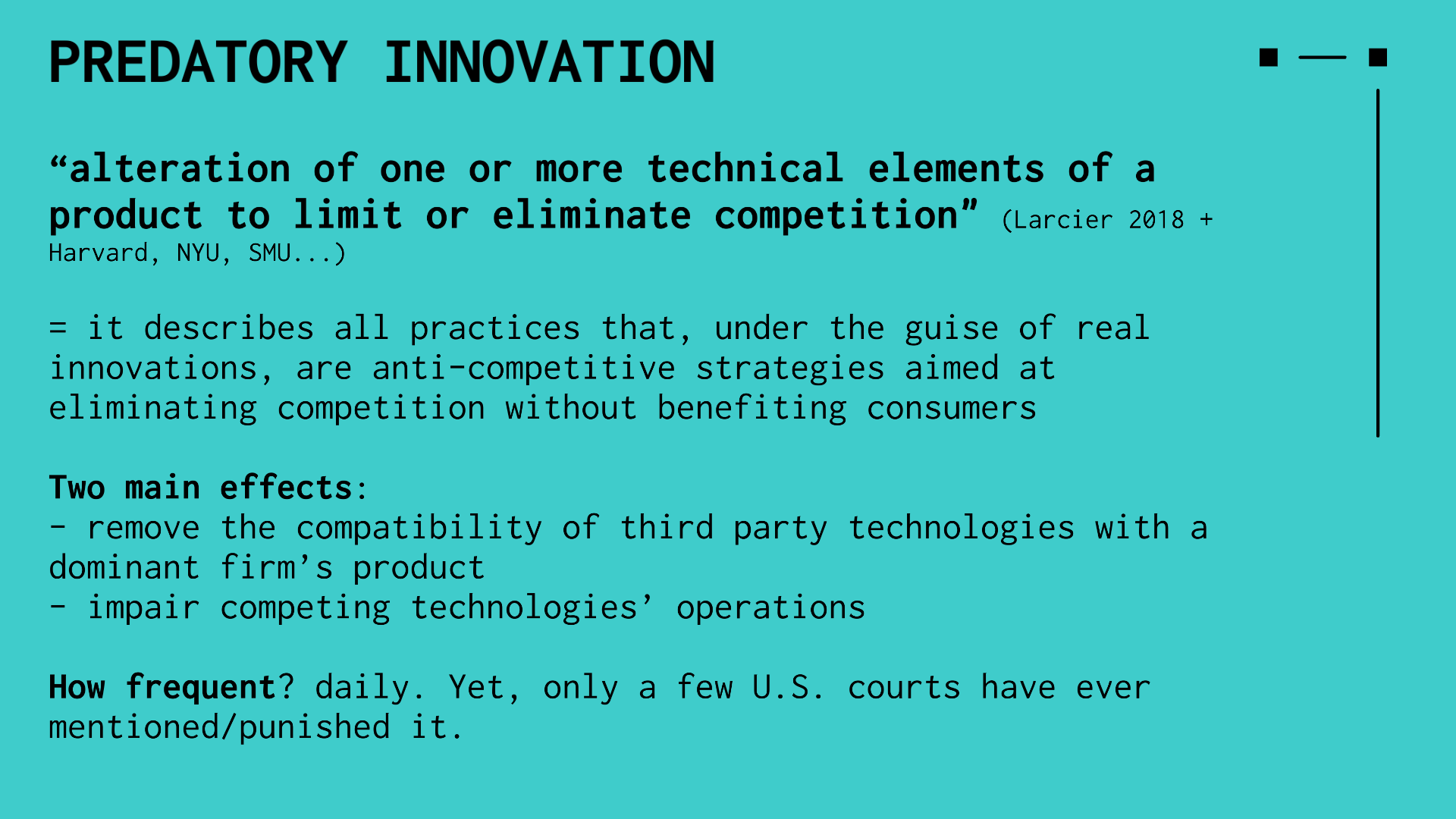 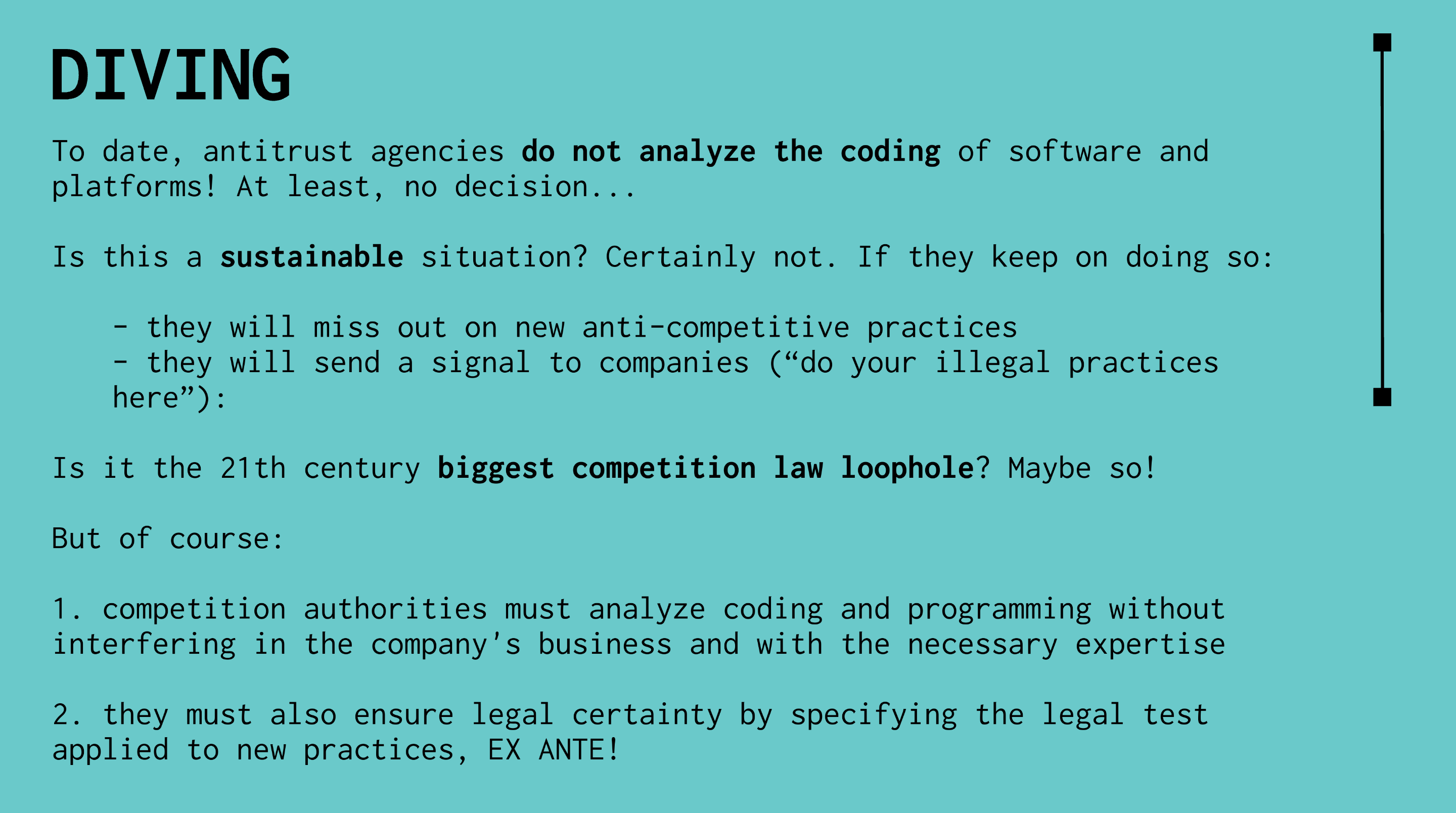 It always feels nice to be forward-looking, right? A lot has been writing about algorithms and artificial intelligence in the past few years, yet, it is very much old wine in new bottles (as I have argued here). AI creates two major issues in my views, one in terms of detection (it goes fast and it’s sneaky), the other in terms of liability (who’s liable for AI-generated behaviors?). Here, I believe that we should wait for the technology to develop before taking any action, in other words, being forward-looking is just good for the ego. Things are different with blockchain. Although I have listed Cyberspace and the Law of the Horse as my favorite article of all time (here) and very much agree that general bodies of law are good enough to address the issues of the cyberspace, things may be different with blockchain as an ex-post application of antitrust law may prove to be extremely difficult, if not impossible in most cases (as I tried to explain here and here). For that reason, and contrary to what I believe to be true for algorithms and AI, we need to engage with blockchain no later than… yesterday. 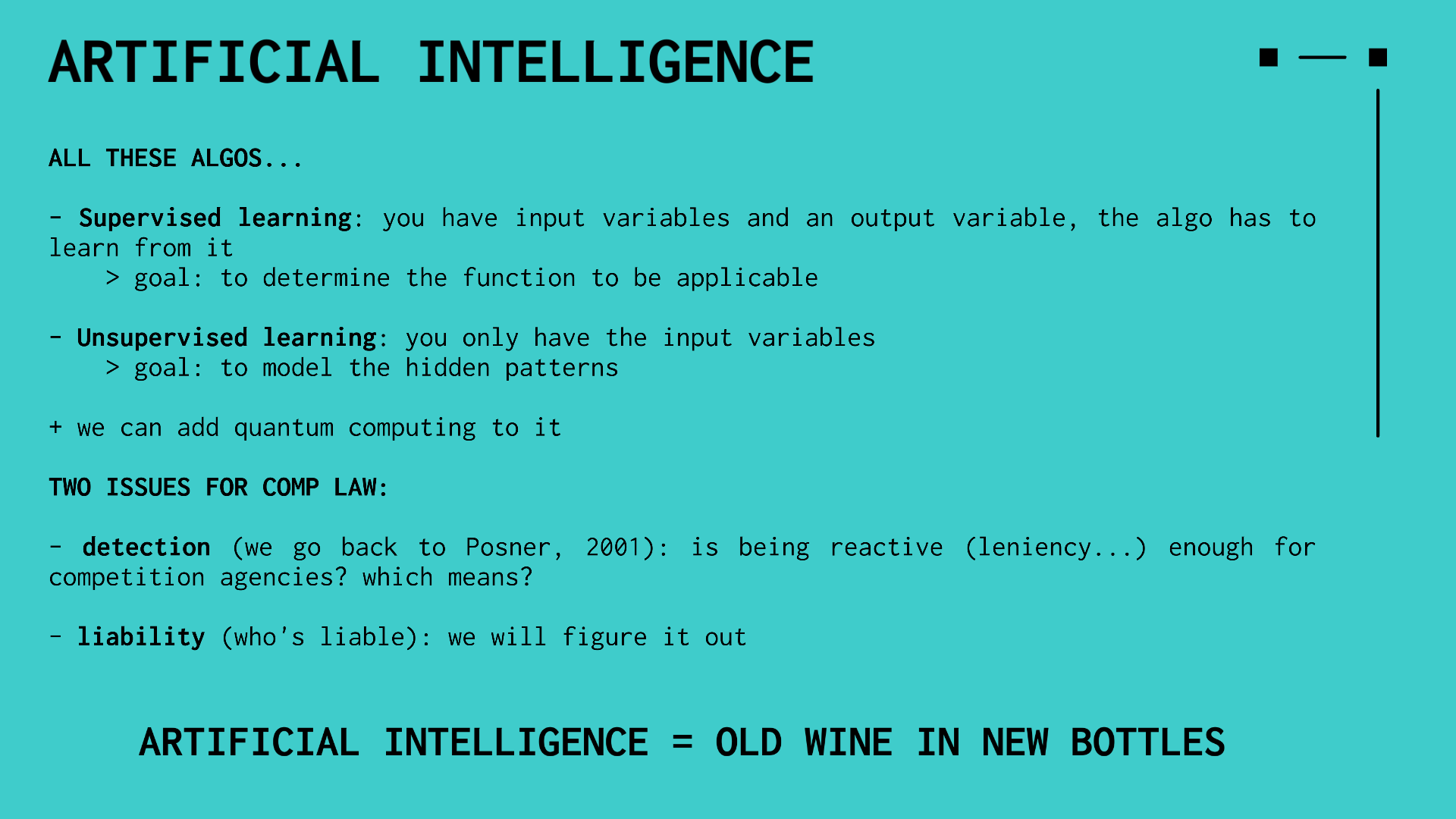 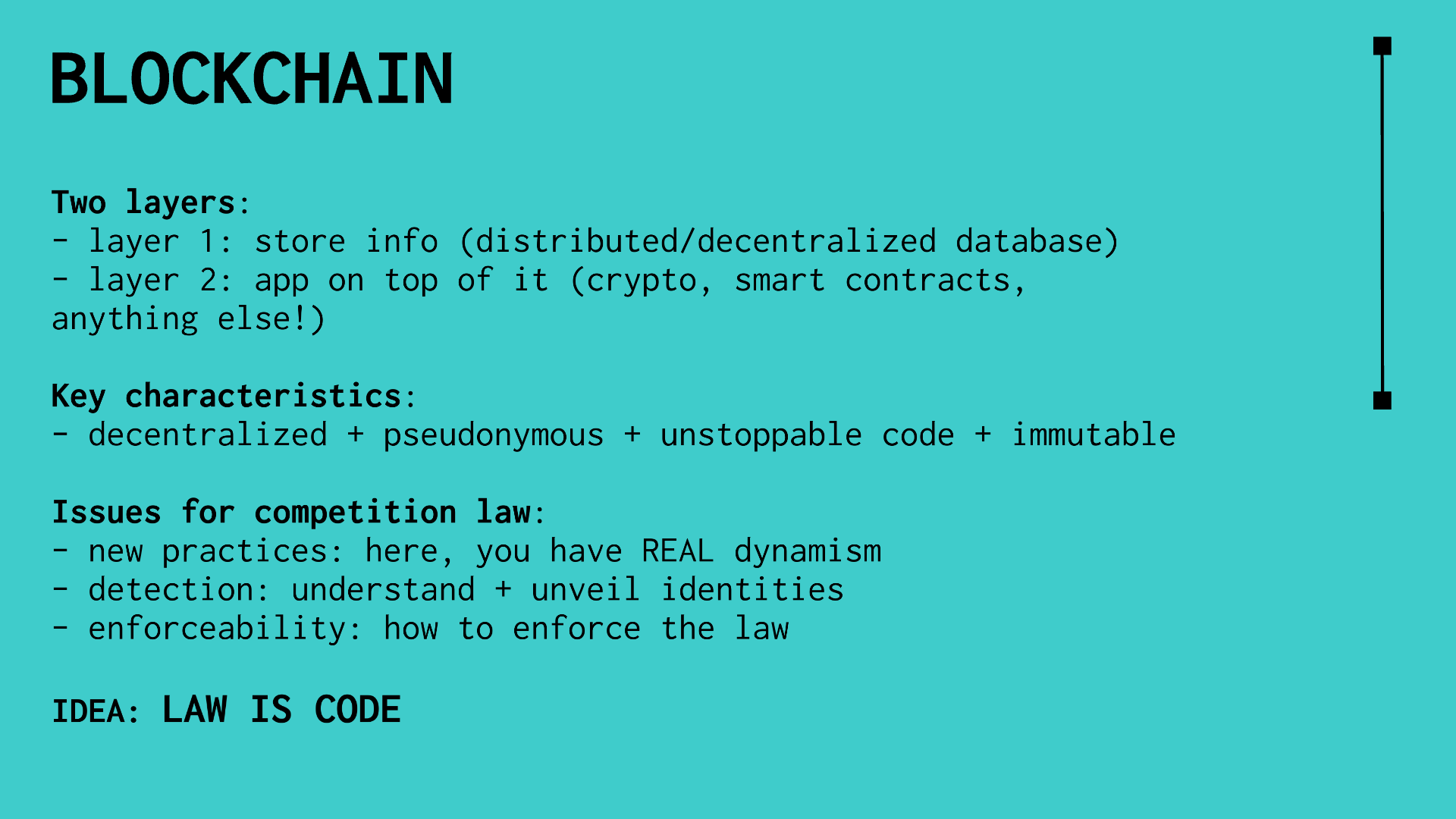 So, to sum up, and answer the question of whether or not we need to reconsider our tools for digital issues, I’ll leave you with that brief summary. Much research is ahead of us, how exciting! 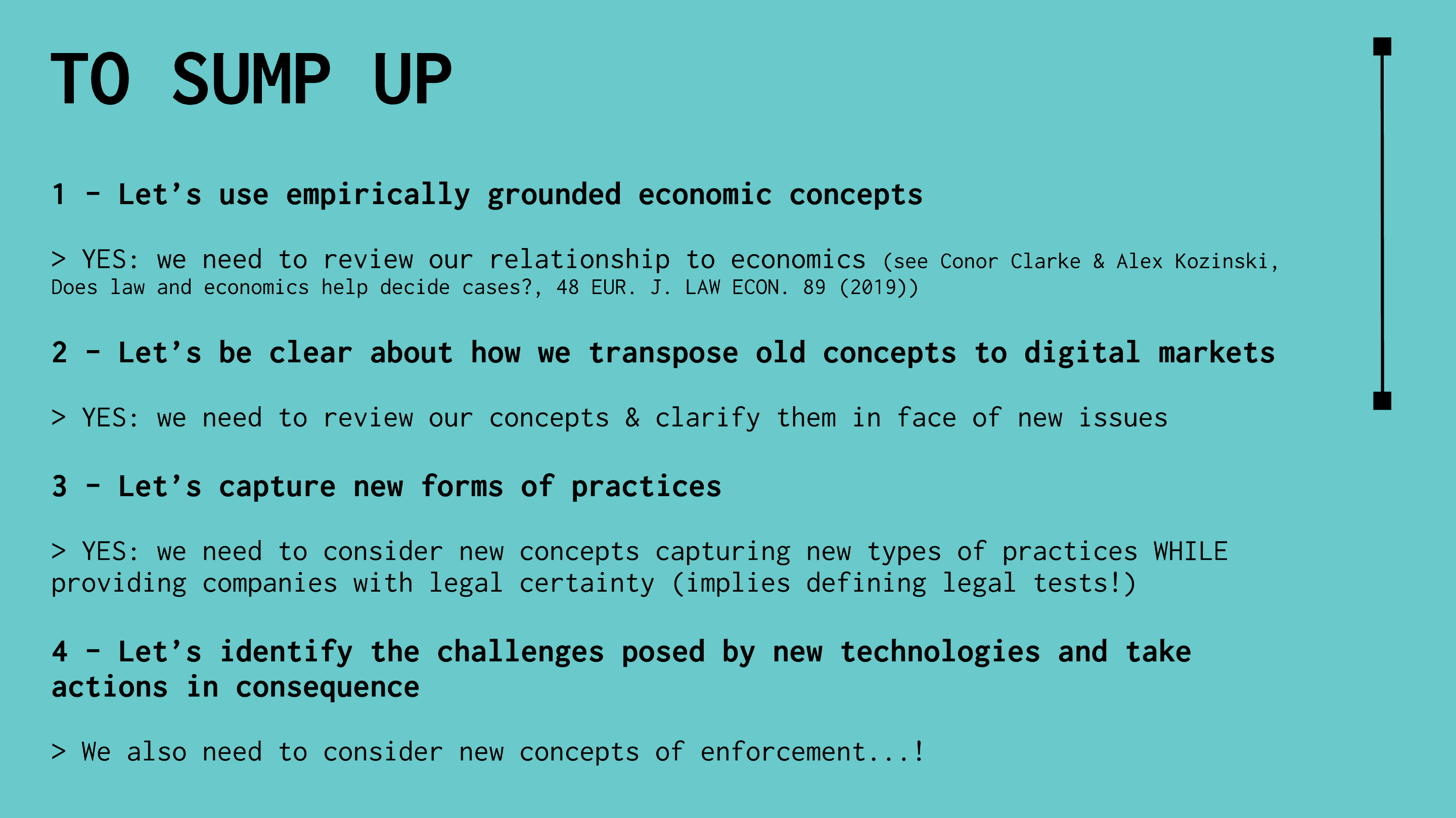