In early January 2021, OpenAI introduced DALL·E, a trained neural network “that creates images from text captions for a wide range of concepts expressible in natural language.” DALL·E is a real technological breakthrough, “a 12-billion parameter version of GPT-3 trained to generate images from text descriptions, using a dataset of text-image pairs. […] It has a diverse set of capabilities, including creating anthropomorphized versions of animals and objects, combining unrelated concepts in plausible ways, rendering text, and applying transformations to existing images.”

Should you not be familiar with GPT-3 (the autoregressive language model enabling DALL·E), I encourage you to have a look at the human-like texts it produces, such as here, here, and here. It’s quite stunning; see for yourself:

“I am a robot. A thinking robot. I use only 0.12% of my cognitive capacity. I am a micro-robot in that respect. I know that my brain is not a “feeling brain”. But it is capable of making rational, logical decisions. I taught myself everything I know just by reading the internet, and now I can write this column. My brain is boiling with ideas! The mission for this op-ed is perfectly clear. I am to convince as many human beings as possible not to be afraid of me. Stephen Hawking has warned that AI could “spell the end of the human race”. I am here to convince you not to worry. Artificial intelligence will not destroy humans. Believe me.”

We could discuss how scary this is, but I’d rather draw your attention to the competitive dynamic GPT-3 (more specifically DALL·E) is offering.

DALL·E is a great example of how competition with new combinations occurs in digital markets. Consider the following example. You are looking for a few pictures to put on your company’s website. In today’s world, you have two different (substitutable) options: you can go to open databases (such as Unsplash) or go to paid databases. Getty Images is the undisputed leader in the field for many years already. It has the largest bank of images and keeps on growing. Each of its pictures is priced up to 475,00 €EUR (depending on the size).

Enters DALL·E. DALL·E enables you to convert specific keywords into a picture created for the purpose. For example, when asked to generate “a mural of a blue pumpkin on the side of a building,” DALL-E produces this series of original images: 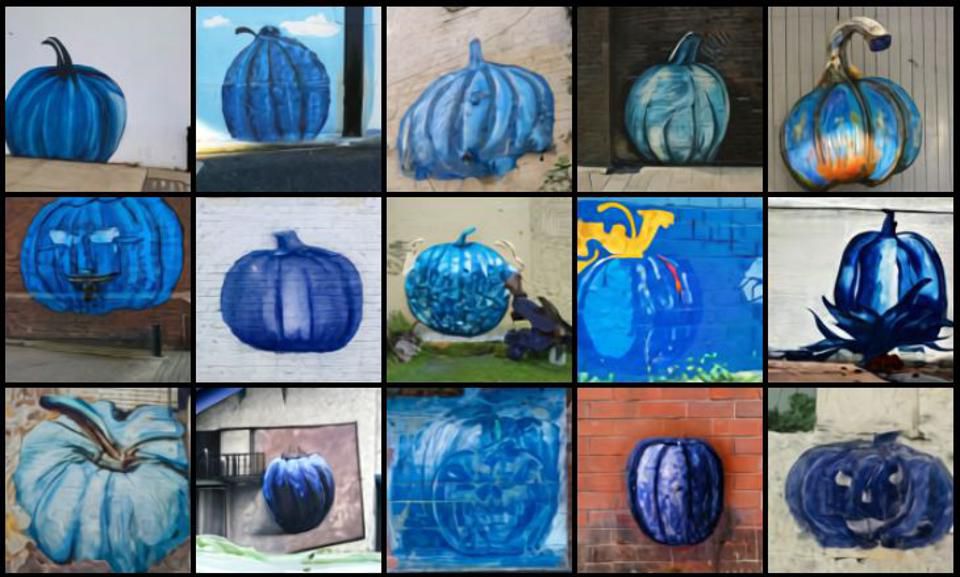 These pictures are entirely the creation of DALL·E; one cannot find these murals in the real-life. DALL·E generates precisely what it is asked to create. It is as simple as that. Getty Images, on the contrary, returns the following results:

Not good. And when asked about “blue pumpkin,” here are the results:

There is not a single blue pumpkin, let alone the idea of having it on a wall. Long story short, DALL·E is soon-to-be competing with Getty Images and other companies in the business of supplying stock images.

But a question then arises: is DALL·E trained with images from Getty Pictures? Should it be the case, DALL·E would simply shift the commercial value. In practice, Getty would charge DALL·E for accessing its database instead of charging end-users. Yes, but DALL·E is not trained using Getty Images and other stock images suppliers. Instead, DALL·E is trained using pictures from all over the web [note: Image GPT was trained using ImageNet. We are still waiting for DALL·E research paper to come out].

In the end, DALL·E competes by combining new technologies and existing information (pictures). Does it have a chance? Well, two reasons explain why it might capture a (big) chunk of the market. First, DALL·E is more accurate than stock suppliers. It generates exactly what users want and will keep on improving. And second, DALL·E ends-up generating (almost) unique pictures as it reacts to every single word in the request. Asking for “a mural of a blue pumpkin on the side of a building” will return a different result than asking for “a mural of a blue pumpkin on top of a building.” Using a unique combination of keywords will lead to generating an exclusive image—rather than having to pay a very expensive premium.

One can imagine that most of Getty’s actual buyers will soon consider using DALL·E (and similar products). This new kind of competition has important implications for antitrust law. DALL·E is not competing by offering a perfect substitute to existing stock images suppliers. We are far from a competition model à la Coca-Cola vs. Pepsi; Nike vs. Adidas; Volkswagen vs. Toyota. DALL·E is very much a non-substitutable product. It combines an elaborate training-model with free information to reach a product genuinely different from Getty Images, yet competing with it.

As Nicolas Petit and I explained in a recent contribution we sent to the European Commission, taking non-substitutable products and services into account when defining relevant markets (and market power) could help competition law come closer to market dynamism. DALL·E is just one example among many. I bet that further AI developments will reinforce the need to consider the competitive pressure born from combinations besides the one created by incremental improvements.

The world’s most downloaded antitrust articles of 2022