Understanding zero-price markets has never been more important. With the FTC reportedly weighing whether to block Facebook’s plans to integrate its various apps, and various investigations underway across the globe, more scrutiny than ever is being paid to Silicon Valley giants. But what do we pay for these digital apps.

One of my favorite things about co-authoring Le Concurrentialiste with Thibault is that we often agree, but for wildly different reasons. His recent post on “Why You Are Not Paying with Your Data” is a great example. (If you haven’t read it yet, check it out here.) I couldn’t agree more with his conclusion that we don’t “pay for” access to Facebook, Google, etc., with our data. But I couldn’t disagree more with his reasoning. Here’s why I think he’s right for the wrong reason.

We are the producers, not the consumers

In his post, Thibault argues that people “can’t ‘pay’ with something that doesn’t exist when [they] are not consuming the product.” Because data isn’t created when people don’t use digital apps, he concludes, we must not “pay for” these apps with our data.

This adopts a familiar conception of people as the “consumers” of zero-price digital apps. Policymakers, economists, scholars, and the popular media all tend to take this same view. (For just one recent example, here’s the FTC referring to Facebook users as “consumers” in June 2019.)

Markets involve three functions: production, distribution, and consumption. So, for example, BMW produces cars, which dealers then distribute to consumers. 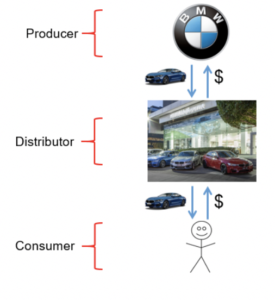 Humans frequently play the role of “consumer”. But that’s not the case when it comes to Facebook or Google. Those companies make their money not by selling things to us, but by selling ads to companies like BMW. Those advertisers, then, must be the “consumers”. Where does that leave us? We aren’t the distributors, so we must be the producers. What do we produce? Two very valuable products: attention (eyeballs) and information (data). As I’ve been explaining since at least as far back as 2014, we exchange these products to companies like Facebook, Google, or Twitter in what I call “zero-price markets” (a term that seems to be catching on!).

Here’s what these digital markets look like, with BMW representing an advertiser: 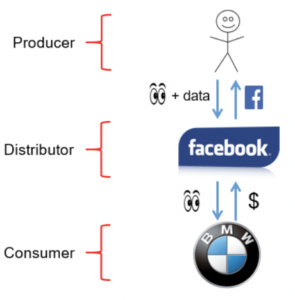 So Thibault is technically right to conclude that we aren’t paying “with” our data. Instead, we’re being paid for our data—just like humans in labor markets get paid for their labor. The only difference is that users are paid via access to Facebook, while workers are (usually) paid with money.

But here’s the problem. The basic argument we’re unpacking is that “You can’t ‘pay’ with [data, because it] doesn’t exist when you are not consuming the product.” Thibault offers us an abundance of analogies: using digital apps is like playing tennis, driving cars, watching movies, riding on planes, and eating pasta.

Whoa. Let’s just take one of these, and see if we can get the gist. If you don’t eat a plate of pasta, then you aren’t able to eat that pasta. Similarly, if you don’t use Facebook, then Facebook won’t be able to collect your data.

Hmmm. Technically true, but the same observation could be made in any market! If the market participants don’t participate, then no market activity will take place. If BMW chooses not to produce cars, then people can’t buy BMW cars. If we don’t use an app, we don’t produce app-relevant data, and the app’s owner won’t be able to collect our data. This is all true, but a non sequitur—it’s simply saying that if we don’t do anything, nothing will happen.

We may not “pay” with our data, but we definitely “exchange” it.

Now, here’s where things get fuzzy. Because the argument appears to fall into the “people-are-consumers” trap, I am admittedly a bit unsure as to where it ends up. If the argument is merely that we don’t “pay” for Facebook with our data, well, that’s (kinda) true—albeit for a far different reason than the tennis-cars-movies-planes-pasta-analogy offers. But if the claim is that we don’t “exchange” data to Facebook, that’s incorrect.

We produce data via our actions, much like we produce labor via our actions. Of course, if we choose not to produce data (or labor), then it won’t be exchanged. But when we do choose to produce and trade these assets, then exchanges do occur. That’s the point people are trying to convey—albeit somewhat clumsily—when they argue that we “pay for” Facebook with data.*

And just in case you’re still on the fence, consider this. Tech companies all impose “Terms of Service” contracts on their users. To be enforceable, at least in the U.S., a contract requires “consideration”: each party must surrender something that is of value to the other. If users aren’t surrendering their valuable data and attention to tech companies, then those companies’ ToS contracts would be unenforceable. Yet tech companies are very quick to invoke ToS agreements in court. And U.S. courts have repeatedly agreed that those agreements constitute enforceable contractual exchanges. For further reading on this, check out “The Myth of Free”.

Thanks for your attention—and I promise we are not recording your data!