Let’s play a game: I pretend to write the script of a movie, and you tell me which movie that could be. OK, here we go:

In platform markets, one side (generally, advertisers) is paying while the other may not pay with the thing we call… money. This is not true for all platforms, users pay for Netflix, and Airbnb, and Uber, and Amazon; but this is true for numerous of them, including Google, and Facebook, and Instagram.

As such, when the owner of a platform is said to abuse its dominance on the side where users are paying, antitrust authorities have a hard time showing consumer harm on the other side. For that reason (I guess), the European Commission barely mentions any harm in the press releases of its three Google decisions.

No worries, antitrust authorities have found a way out by arguing that a reduction in choices – due to the elimination of one company on the paying side – necessarily hurts the consumer. In Google Shopping, the EC held that the company “denied European consumers a genuine choice of services and the full benefits of innovation.” In Google Android, it was essentially found that the company had deprived choices to the consumer by denying “rivals the chance to innovate.” And finally, in Google AdSense, Margrethe Vestager held that “the most important thing is to enable user choice,” adding that “the ability to choose also makes you feel that you’re in control.” OK, feelings are important, but… should the EC make sure that users feel good? Maybe it’s part of the consumer welfare, I don’t know, this is not the point anyway.

In the Google Shopping decision, the European Commission has made clear that behavioral economics has a role to play in competition law (I challenged this idea along with some Nobel laureates over here). There’s even one section named “7.2.3.1. Analysis of user behaviour“. In Google Android and Google Adsense, the Commission… wait, we don’t know yet because we are still waiting for the decisions to be published (but, once again, this is not the point).

I will not discuss today why I think that using behavioral insights in antitrust ruling is tricky business, but I will make the case that if they are to be used, it should be done fairly (). In other words, either antitrust authorities do not use behavioral insights and rely on the (unbounded) rationality of consumers, or if they use them, they must then study both sides of the coin, not just the side that shows a number ().

3. The point of no return

A multitude of behavioral studies tends to indicate that the more choice is given to consumers, to more they actually go for the first or the default option. This is called the “Choice Overload,” or, the “Paradox of Choice.” The authors of the Behavioral Economics Guide 2018 discuss a great deal about it, and so does the American psychologist Barry Schwartz, see his book on the subject, or his TED talk. Actually, a study published in the Journal of Consumer Psychology recently has shown that the more choice is given to consumers, the fewer consumers would buy (or click on) anything.

Put differently, behavioral insights indicate that more choice is not always pro-consumers, as it may confuse them. Let’s make the test ourselves. Let’s imagine that you are looking for a video-editing app. Here are two results on your search app: 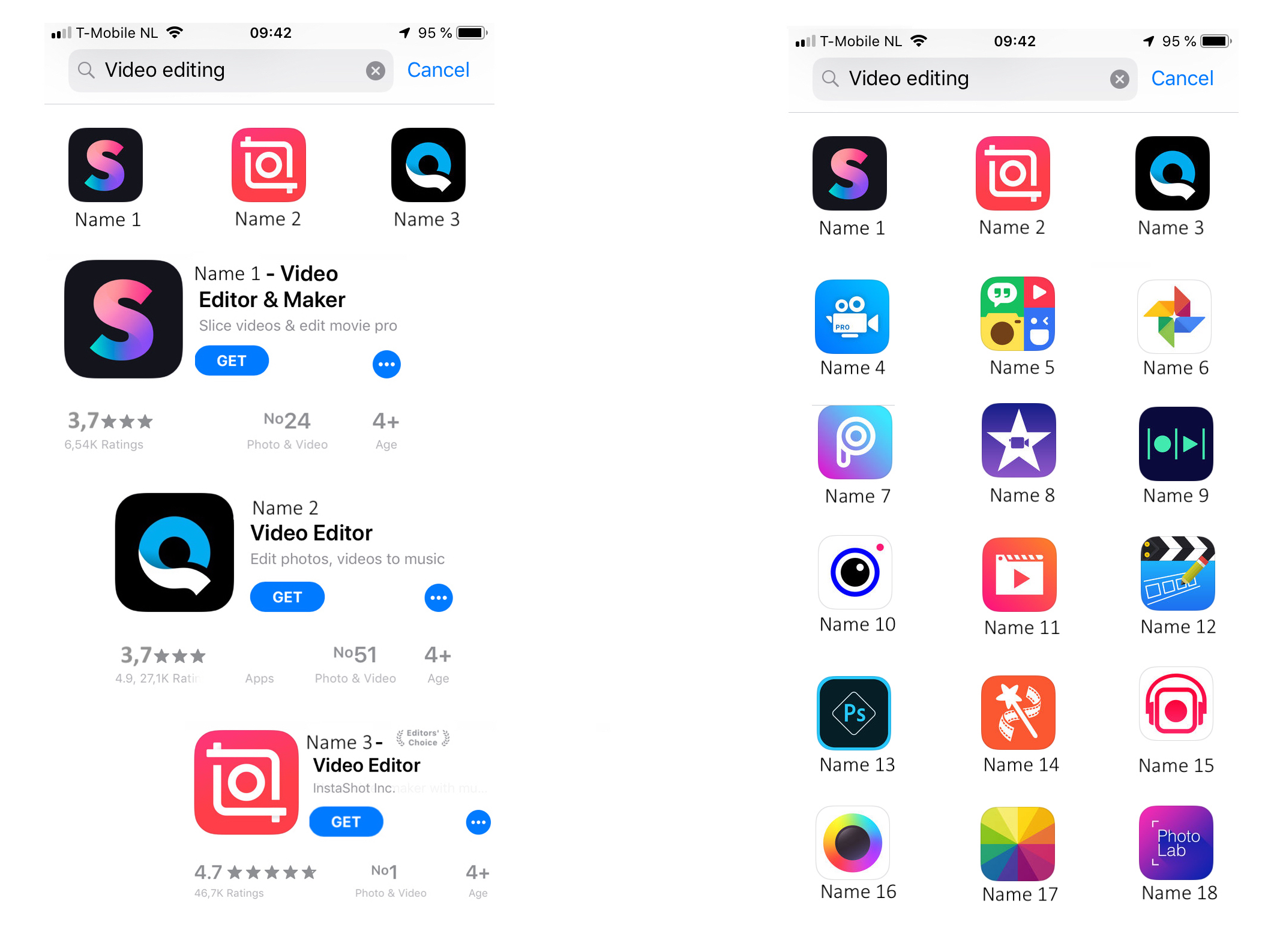 Now, let me guess. On the left screen, you probably had a look at the three alternatives and realized that the 3rd option was interesting (I just know it), while on the right screen, you did not really have a look at all alternatives and just wanted to take the first one. Why is that? Well, your behavior is actually described by Bob Aumann’s (2005 Nobel laureates in Economics) concept of rule-rationality “according to which people do not maximize utility in each of their acts, but rather follow rules or modes of behavior that usually–but not always–maximize utility” (I also discussed that with him over here).

In short, it is rational for users not to spend one hour studying all alternatives if, in general, the first options are as good as the last ones (and sensibly of the same quality). On the contrary, if only three options are made available, it may be worth actually spending three minutes examining them all since it’s possible to cover all the offers and see by ourselves. For that reason, again, antitrust authorities can’t simply assume that a reduction in choice necessarily hurt consumers. They have to prove it.

Did the European Commission prove that a reduction in choice was hurting the consumer in the Google cases? Well… not at all.

In fact, the European Commission only presumed it and, by doing so, has contradicted itself. In its Google Android press release, the EC “has concluded that Google has engaged in two instances of illegal tying,” the first being “the tying of the Google Search app.” The harm? By pre-installing its search app, Google made sure that other search app wouldn’t be able to thrive (same logic as the one in the now oooooold Microsoft case). OK.

At the same time, and it’s where it gets crispy, Google was also sanctioned for the “tying of the Google Chrome browser.” Hm… so, if I get it right, it means that most consumers are too lazy to install another browser to try if they like it better, or, at least, that they don’t care enough to do so. As such, tying the browser ensured Google that users would actually use it. Well, OK, but if that is true, it also means that users do not use Google search app in order to look for alternatives, even for the app they use the most (granted, some of them probably use Snapchat a little bit more). In other words, it leads to the conclusion that imposing Google search app did not cause any harm because people don’t use it anyway, and/or wouldn’t use another search app. The snake is biting its own tail.

In short, if antitrust authorities (starting with the European Commission) wish to use behavioral insights, let us hope that they will do so more fairly in the future. This is, generally speaking, the problem with the use of such insights: they kill legal certainty because they depend too much on the specifics. They are also very often goal-oriented (here, sanctioning a company) and applied in a partisan way. Failing to be fair with behavioral insights and studying the two sides of the coin, antitrust authorities will transform the film I’m describing into European Psycho (a remake of American Psycho).

PS: don’t even try to “behavioral” me, I haven’t received any money from Google or any company or any think tank or anyone (except my university) to write this or anything else, therefore, my biases are personal and I don’t have to disclose them 😉

PS2: my mom is a psychologist, so, really, I have nothing against behavioral insights per se, believe me, okay?!