One day, Darwin encountered a young public permissionless blockchain. Here is the transcript of their conversation (all Darwin’s quotes are directly taken from his book, “On the Origin of Species“): 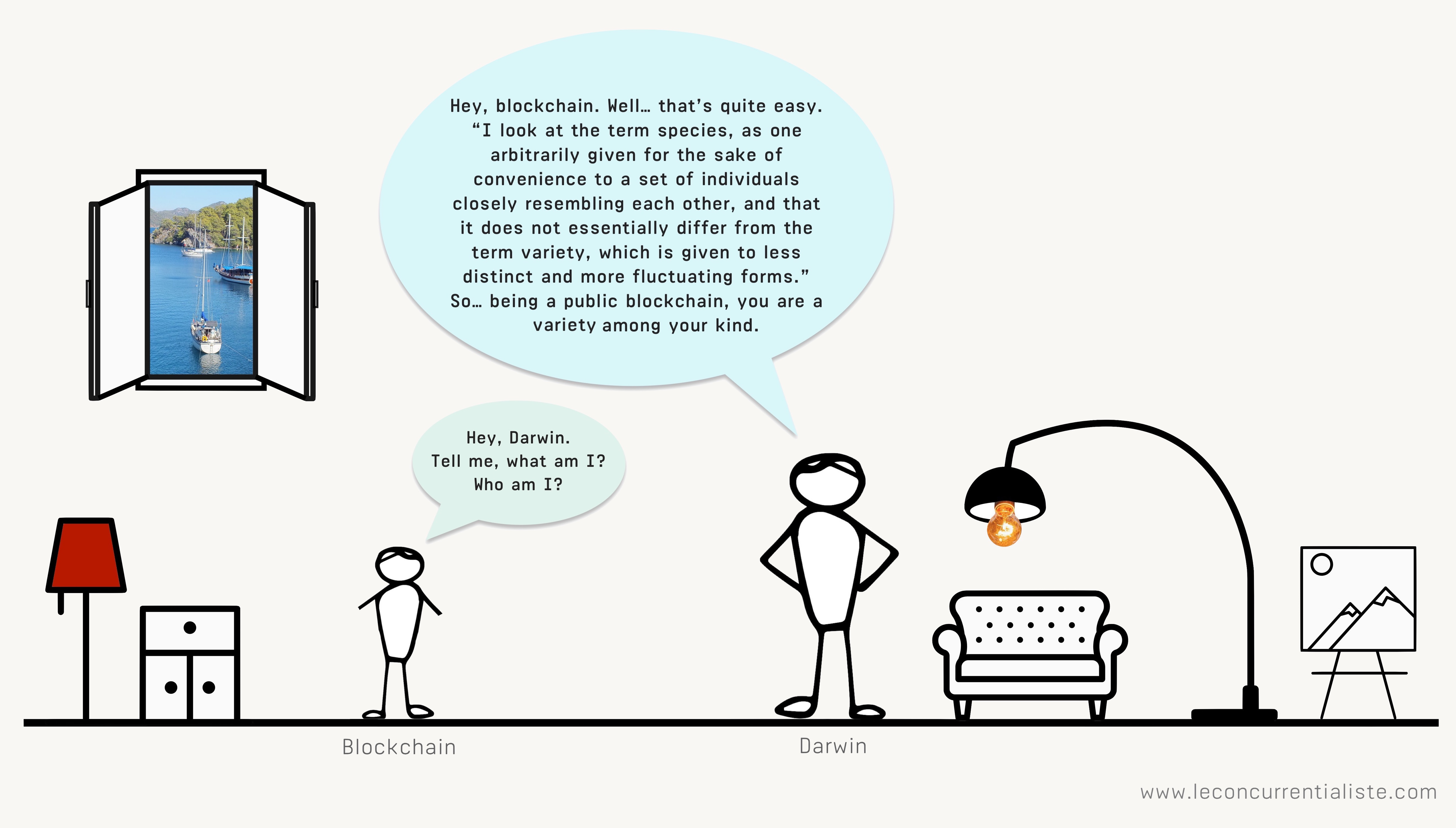 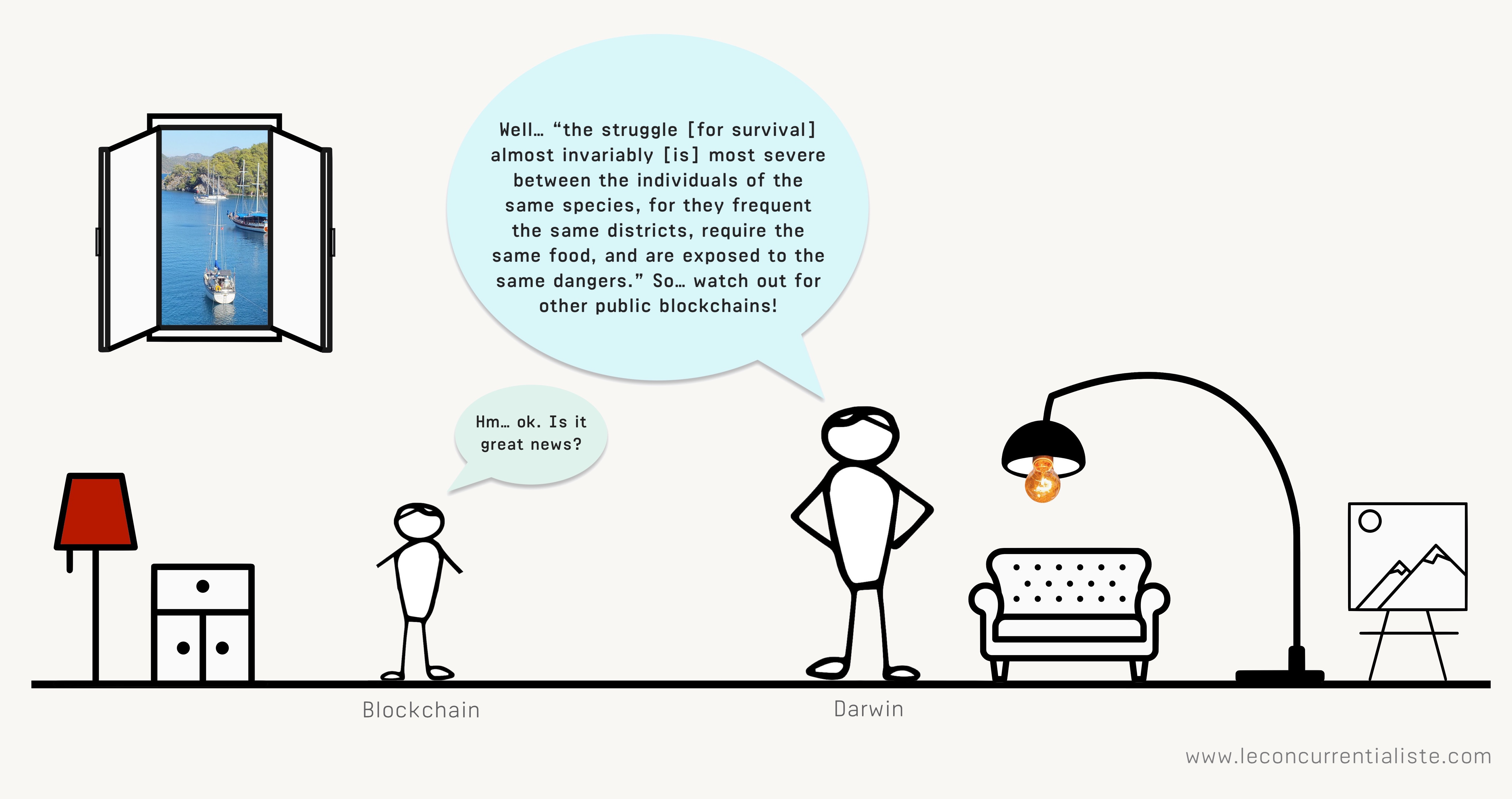 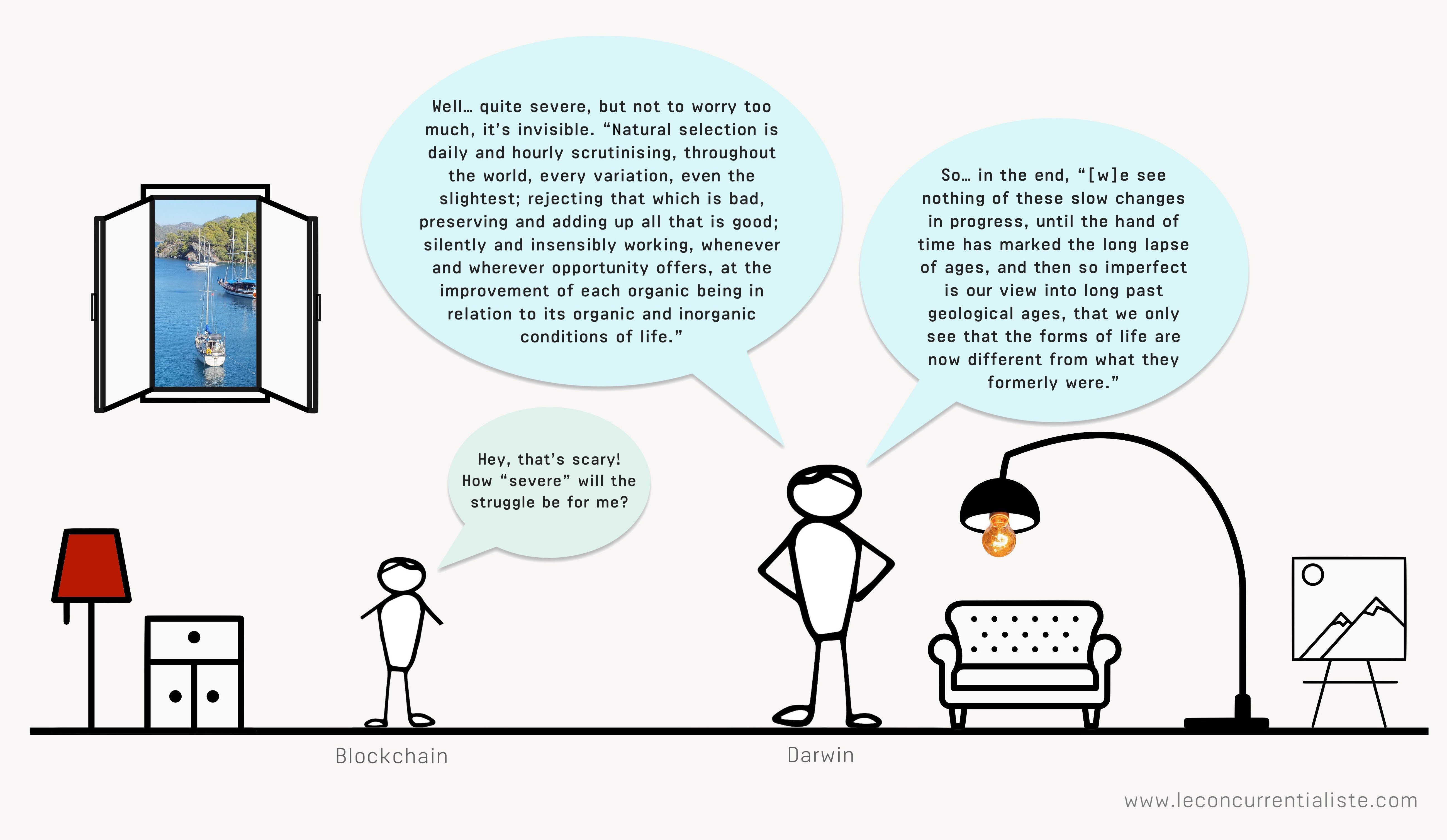 Narrator: Darwin explains that competition between species is invisible: there’s no hand-to-hand combat. Only “the hand of time” declares a winner. It’s a process that creates emergent order and plunges species into a situation of uncertainty (leading them to improve continually). When one looks at the process from the outside, it does not show, but it is there. It’s a matter of using the right tools for observing it. Time matters in that regard. Time is of the essence. 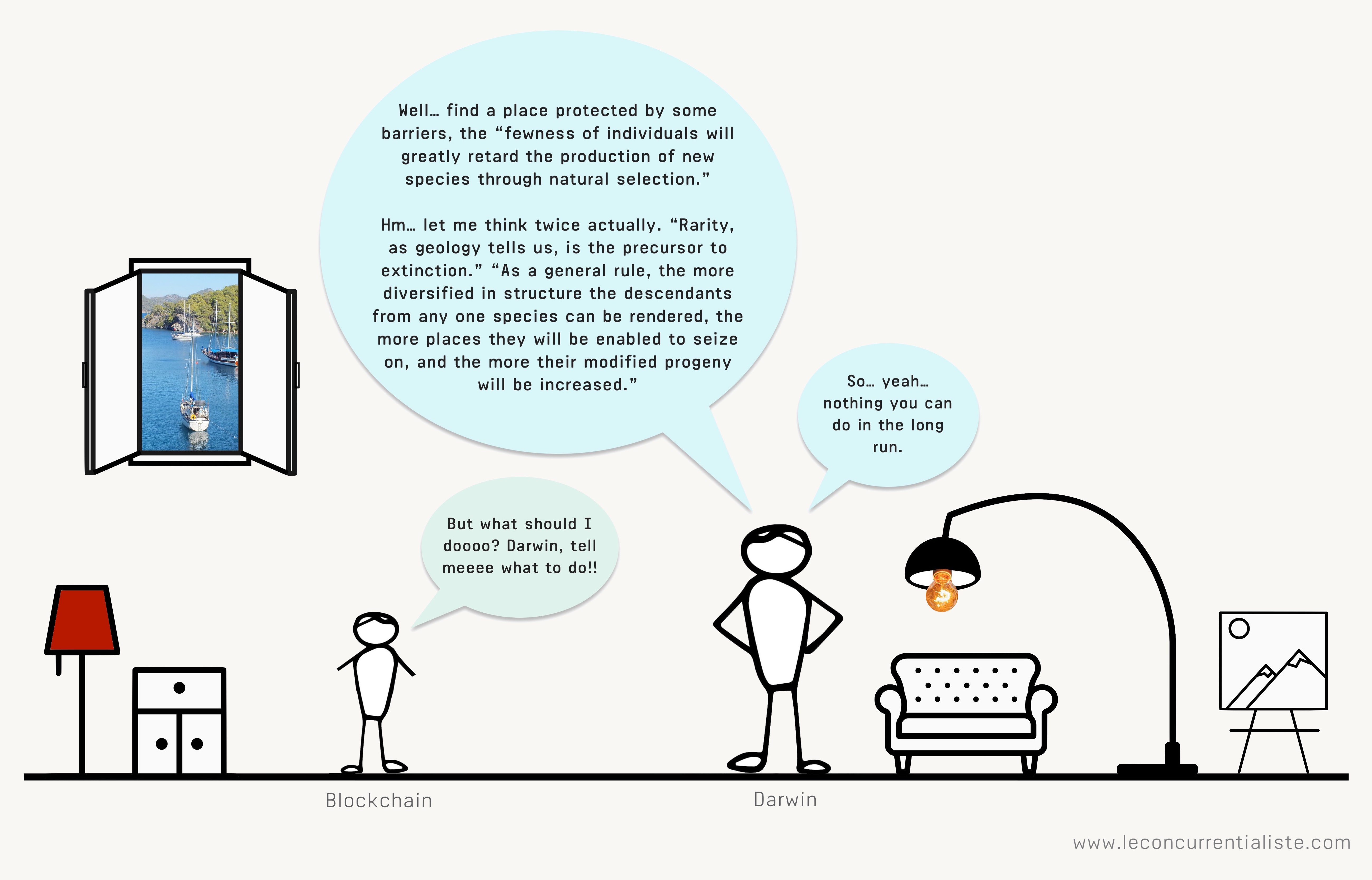 Narrator: Still, the public permissionless blockchain is worried. In fact, if the competition for survival is invisible, it’s even scarier. Darwin answers that the best strategy is to multiply, create variations. But there again, this cannot be engineered. To be sure, top-down policies can create variations, but not the kind that will survive, as only competition will reveal which characteristics are essential. It has to be bottom-up. 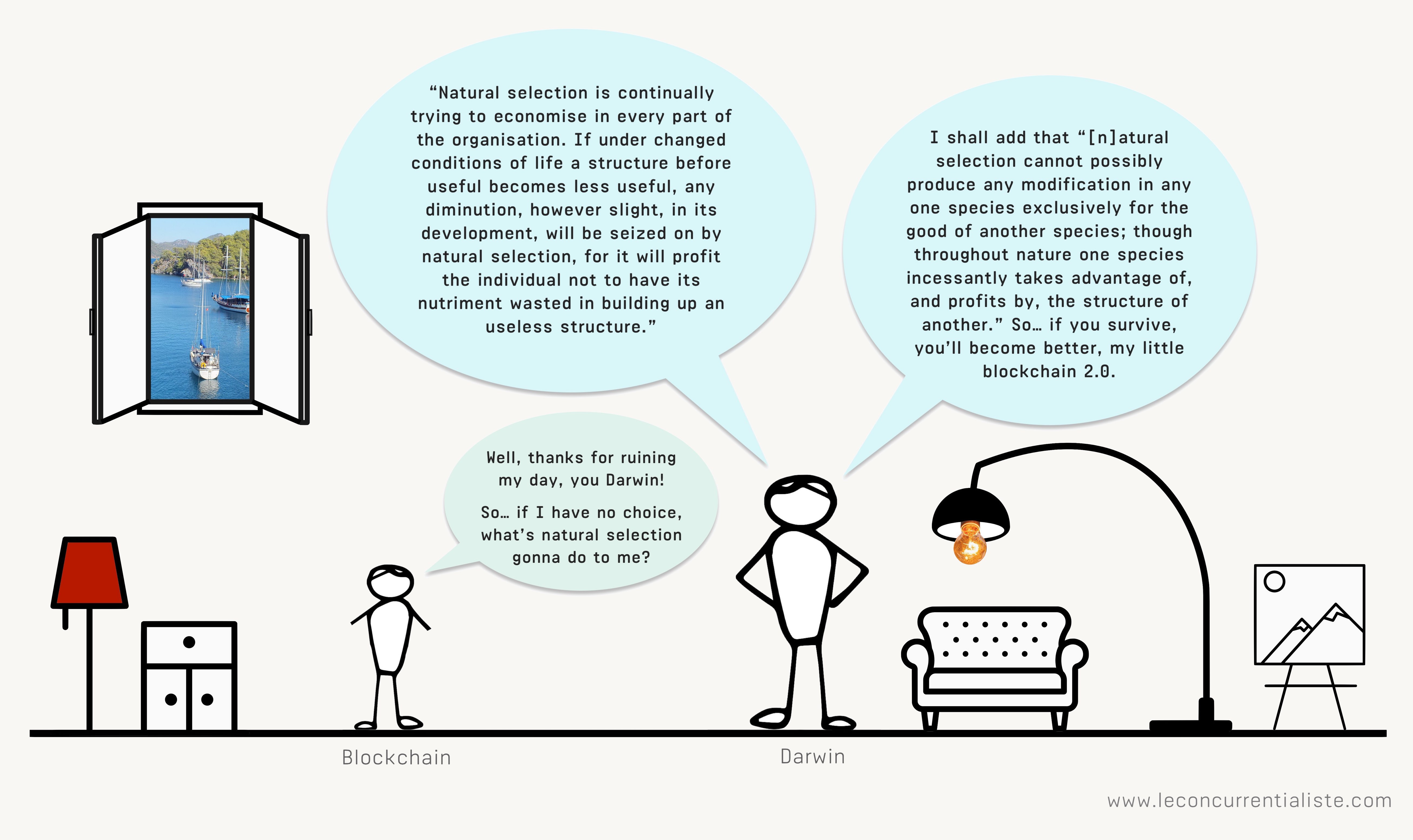 Narrator: Darwin explains that it’s all about efficiency. As a result, any species is adapting to maximize its own survival, and never, oh never, will a species mutate only for the good of others. The public permissionless blockchain is shaking with fear. It is on its own. 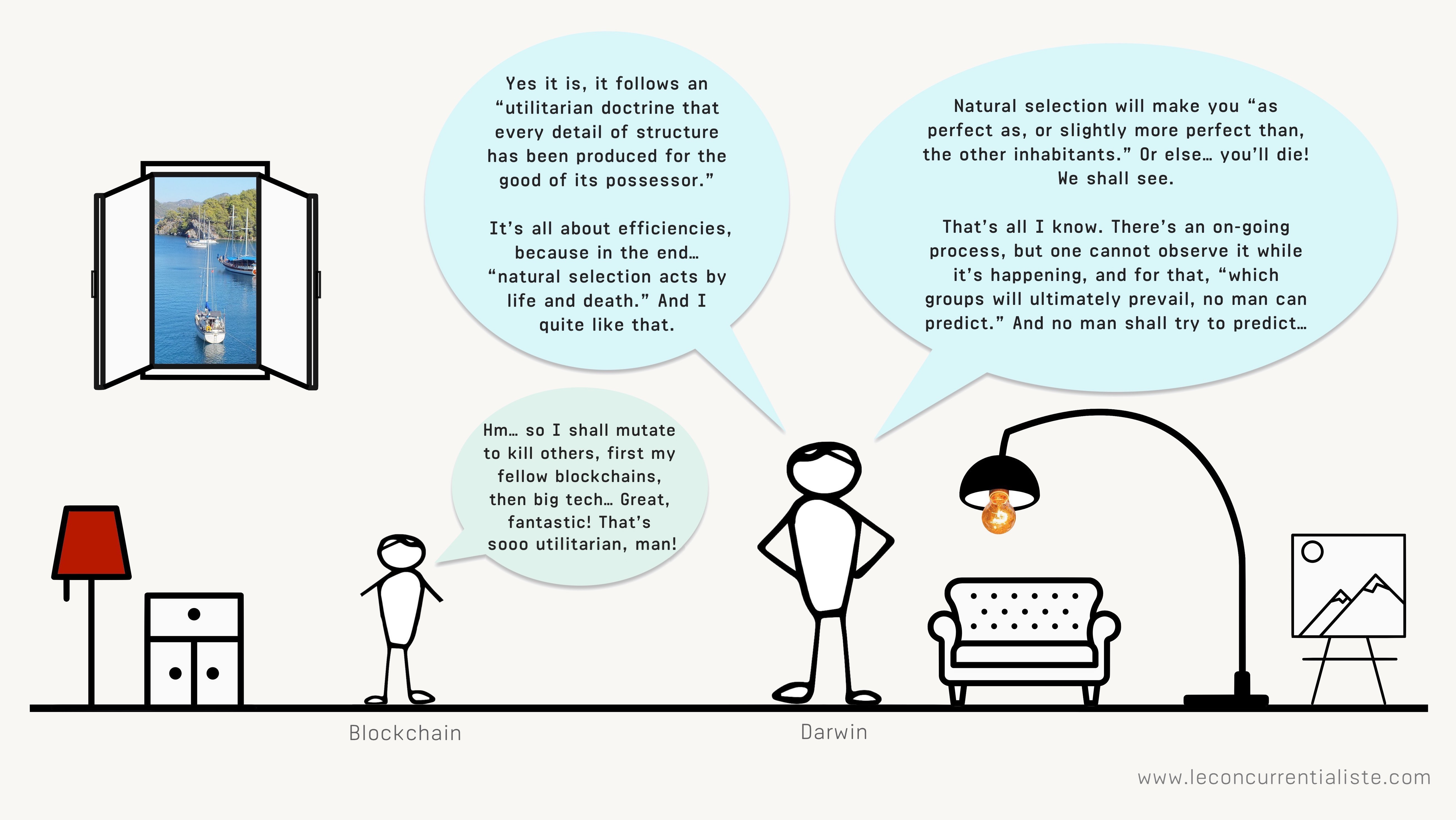 Narrator: Darwin rejoices. Life and death are part of the journey; here goes evolution. Protecting life-form for the sake of it is absurd. Only the process matters, not the results, not the structure.

And that process cannot be engineered, as one cannot systematize the rules for constantly changing complex orders. And probably never will (even with quantum computing). It’s humbling, isn’t it? Well, guess what, evolutionary economics is unfortunately deprecated because some believe that they know better than the competitive process and uncertainty together. They’ve got some nerve. Let us push back, and let us also try to protect and foster evolutionary law in the meantime.

***
Recommended citation:
Thibault Schrepel, A dialogue between Darwin and a blockchain, CONCURRENTIALISTE (July 2, 2020)