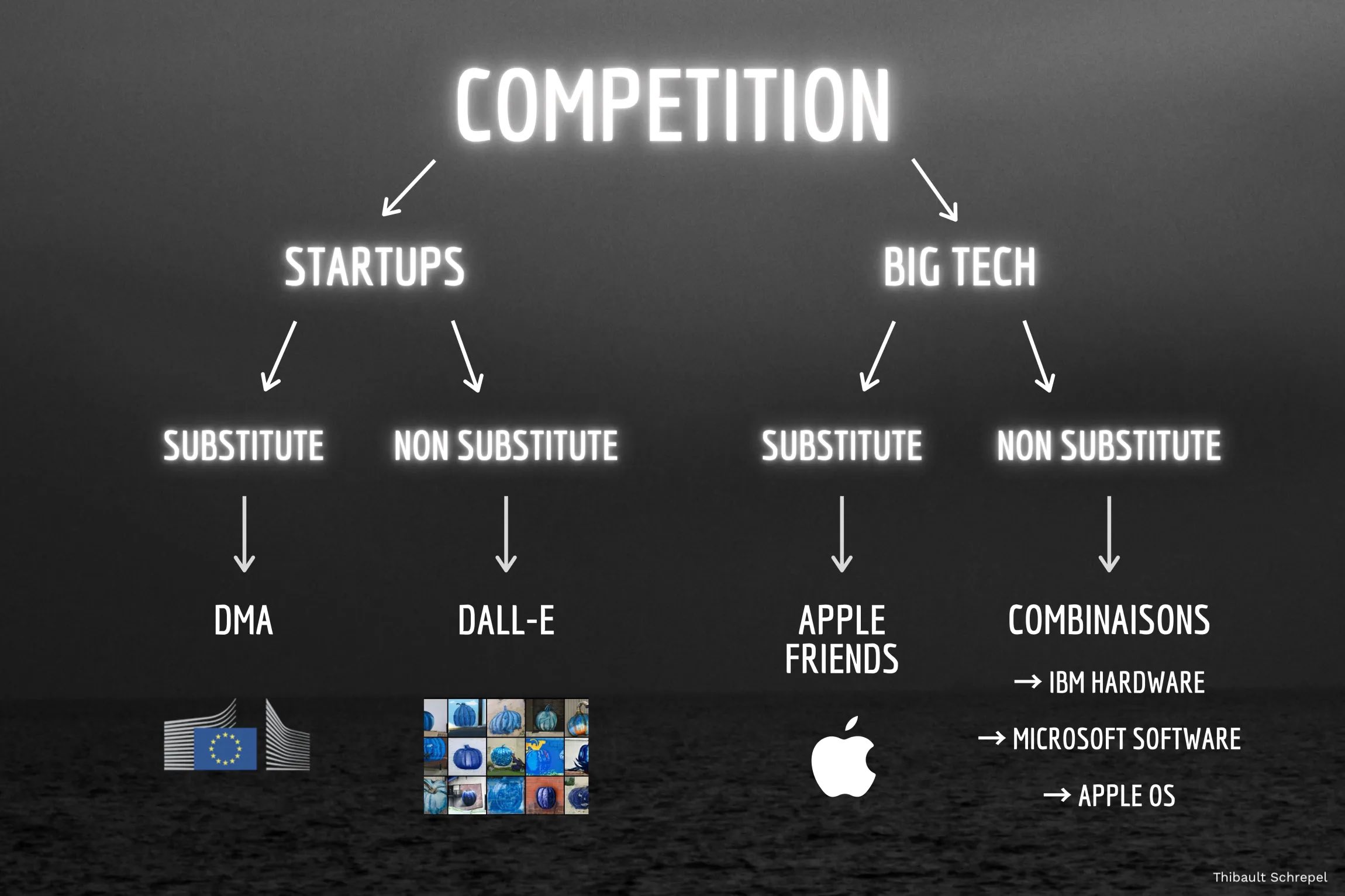 A few weeks ago, Nicolas Petit kindly invited me to discuss the Digital Markets Act (“DMA”) at the European University Institute. I had prepared one slide for my presentation (above). I thought I would develop my thinking further in a post. Here goes.

The DMA appears mainly concerned with the redistribution of wealth. It takes existing digital infrastructures as set, and organizes the market on that basis. This static approach is typical of neo-classical economics. With that backdrop in mind, I started to think about how the DMA rules might indirectly impact the formation of wealth—the emergence of new sources of competitive pressure. Put differently, how is the DMA affecting competition for the market rather than competition on top of gatekeepers’ infrastructure?

Four sources of competitive pressure are relevant to this discussion.

First, startups might compete with so-called gatekeepers by introducing substitutes, i.e., products serving the same purpose (competition #1). For example, a newcomer might compete with Instagram by introducing a similar service with better features. The DMA seems to assume that this type of competition is the most effective and should therefore be encouraged (see the obligations listed in Article 5 and 6, for example, the idea that core platform services should “allow business users to offer the same products or services to end-users through third party online intermediation services at prices or conditions that are different from those offered through the online intermediation services of the gatekeeper”). Unfortunately, it is very hard to think of a single example of a startup taking over a gatekeeper’s product or service by offering a (perfect) substitute. For that reason, one cannot avoid the impression that the DMA seeks to facilitate a type of competition that is ineffective in practice.

Second, startups may compete by offering non-substitutable products (competition #2). Here, the DMA is not of much help. Take the example of DALL·E (a GPT-3 based application). As I wrote several weeks ago, it is easy to conjecture the substantial competition that DALL·E could bring in the market for bank images despite being different in nature from Getty and Shutterstock. This is just one example out of many where non-substitutable products or services can disrupt incumbents. Importantly, DALL·E, and other non-substitute services, neither necessitate access to gatekeepers’ data or fair treatment to deliver competitive pressure. What matters for this type of competition to emerge is mostly an ingenious way to collect, structure, store, and analyze available data. This is hard work, but not work that requires help from data-sharing obligations. Most of today’s successful startups made it this way. Think of Stripe, TikTok, or most of the 500 unicorns created in the past ten years (source: Crunchbase).

Third, digital competition may come from other gatekeepers (competition #3). In this clash of the titans scenario, the gatekeepers compete against each other with substitutable products and services. Many examples spring to mind: Instagram creating stories, Apple releasing AirTags, Twitter launching spaces, and many others… Unfortunately, as I wrote last week, the DMA may undermine this type of competition. To see this, consider the fictitious possibility that Apple creates a new social media (“Apple Friends”). If Apple were to use the personal data collected from iPhone users to improve it, the company would infringe the DMA. Should Apple feature Apple Friends on top of its App Store, it would violate the DMA another time. Put another way, the DMA will protect Facebook’s position by preventing Apple (and others) from leveraging existing market power.

Fourth, so-called gatekeepers may compete by way of introducing non-substitutable products or services (competition #4). They often do so by way of (re)combinaisons. IBM’s monopoly position was disrupted by Microsoft’s ability to introduce Windows 3.0 on its machine before IBM OS/2 could develop a critical mass. Microsoft’s monopoly position was then disrupted by Apple and Samsung’s ability to combine their OS on a device (smartphone) featuring several characteristics people cared about (touch screen, great photos…). This is a story of indirect entry. Here, the DMA is not helping as it focuses on static competition in line with neo-classical economic theory—that is, competition within the boundaries of existing stuff.

In short, the DMA fosters a type of competition that is rarely successful (#1), and it is neutral when it comes to concrete sources of competitive pressure (#2 and #3). Lastly, it slows down competition between gatekeepers despite evidence of the importance of the pressure they exert on each other (#4).

To address this pitfall, I propose the following:

→ The DMA final version could introduce new policies to support startups’ innovation (#2), such as creating financial incentives (see the work of Michal Kremer and Daron Acemoglu), supporting European universities, and facilitating the activities of venture capital.

→ The DMA final version could free recombinations by way of IP reforms (#4). In a world where AI will soon be the first inventor, one must rethink the logic underlining IP. This can be done gradually (as I argued here), for instance, by reducing the scope of patent protection in specific industries.

But of course, I understand how unlikely it is that the DMA will address these points. More realistically, I therefore propose the following:

→ The DMA final version should allow leveraging strategies implemented by so-called gatekeepers against other gatekeepers (#3). One clear way to think about this is: assume you need to enter somewhere urgently. Assume the only way is to force a door, and that designing a perfect replica of the key is not an option. Last, assume you’ve declared to be ready to do “whatever it takes”. What tool will you select? A quick answer suggests using the tool that will deliver the highest force. With this in mind, it takes a second to understand that the best way to crack a gatekeeper’s position open is to use the force of another gatekeeper against it.

Concretely, a policy of this kind only requires adding a caveat in articles 5 and 6 of the DMA. To be more specific, Apple would be allowed to leverage its market power when introducing a new social media (where Facebook is a “gatekeeper”), a new search engine (where Google is a “gatekeeper”), or a new e-commerce service (where Amazin is a “gatekeeper”). On the contrary, the DMA would (still) prohibit Apple from leveraging its market power when introducing a new FinTech service or consumer electronics—because of the absence of “gatekeepers” in these markets. This concrete proposal would contribute to foster moligopoly competition (the fiercest of all) without compromising the spirit and ambition of the DMA.

Citation: Thibault Schrepel, A Concrete Proposal to Improve the DMA, CONCURRENTIALISTE (May 25, 2021) 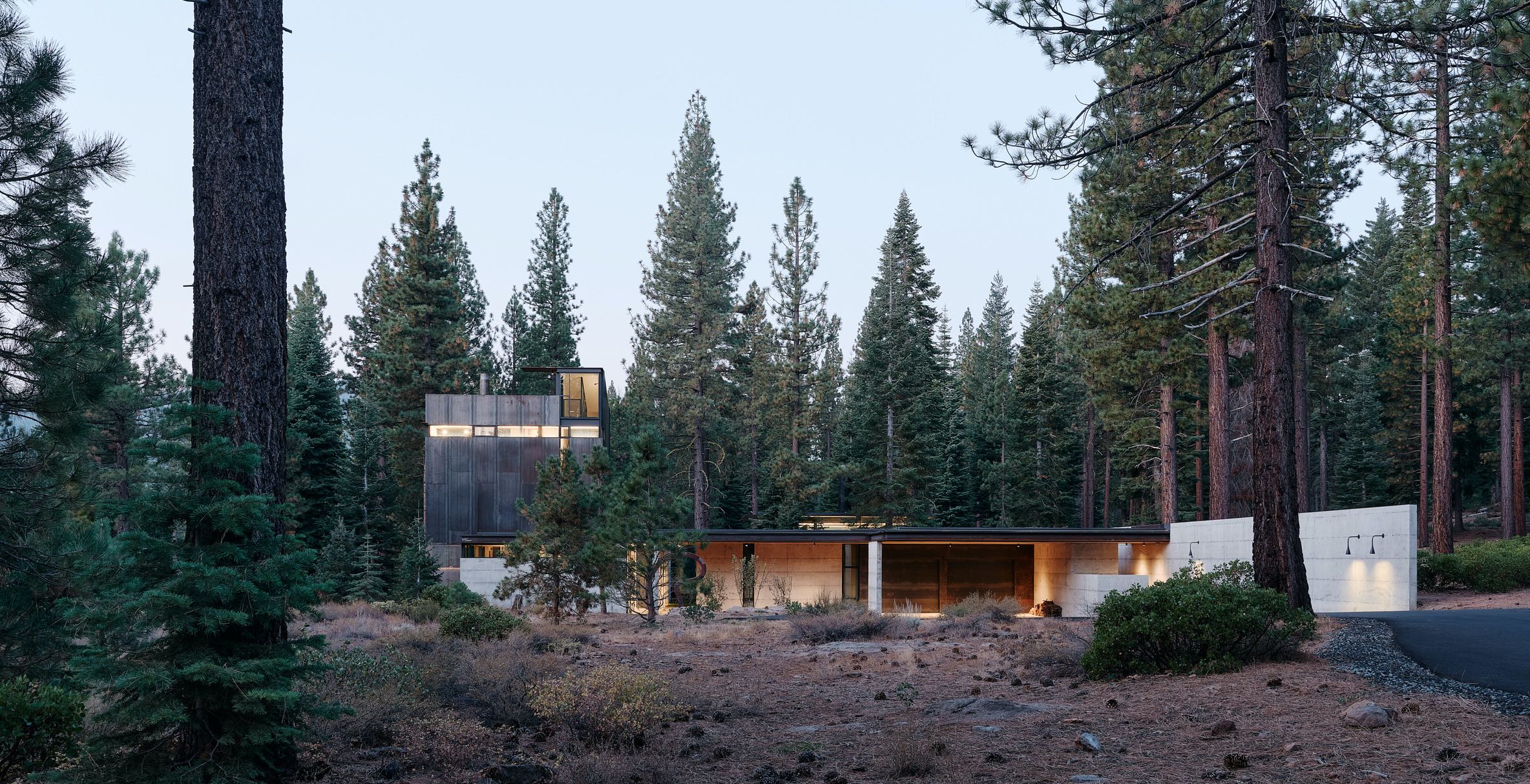 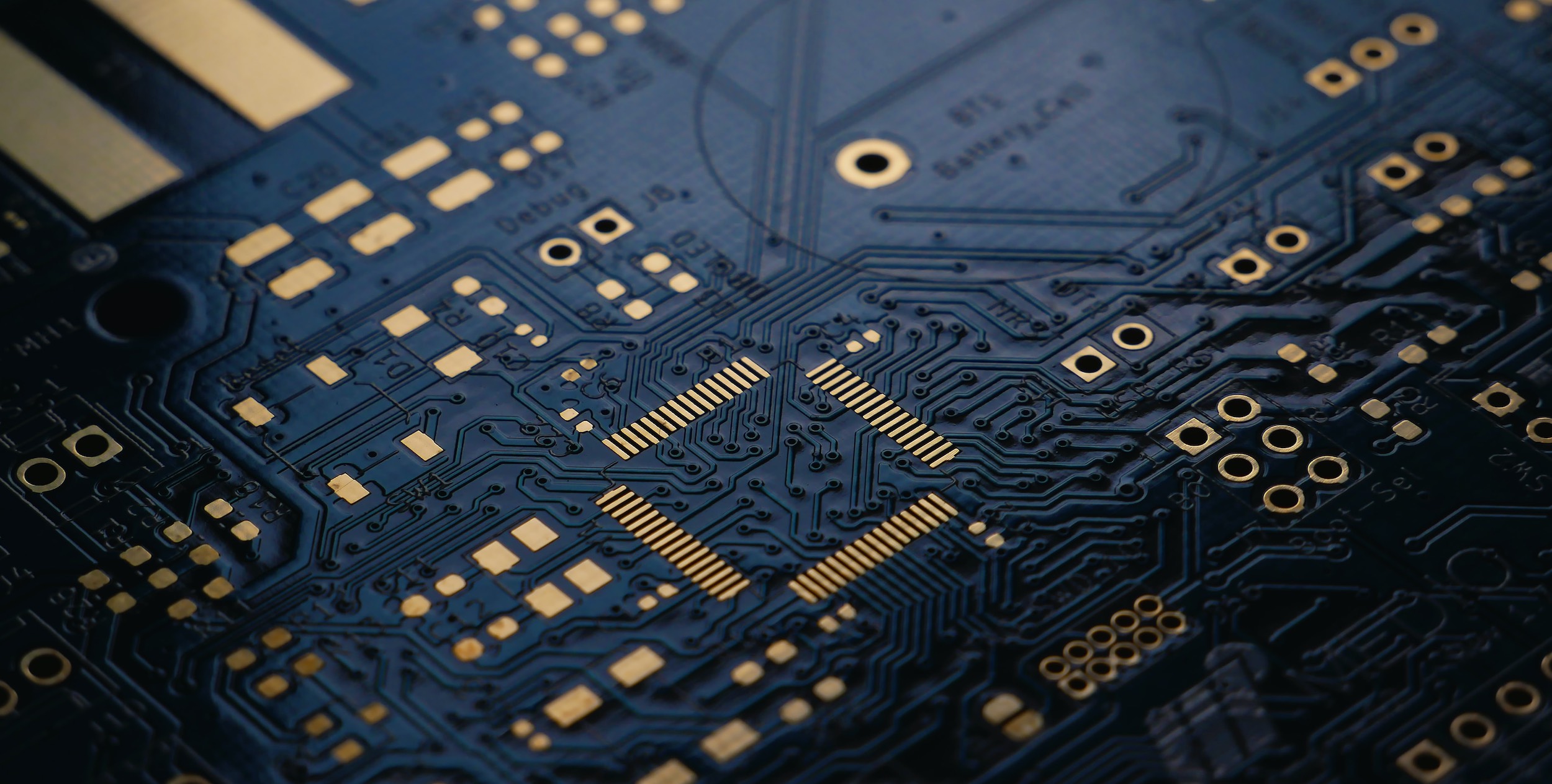